I want to explain why it has only been my voice for this whole Cornwall trip – Barbara, as I think she has mentioned, has begun the admirable but also crazy journey into PhD land. So, when she has imminent deadlines, such as now, the blog is written by me to remove one small extra responsibility from her big list….

So to the walk. Stuart and Selina dropped us right down at the beach, which was very kind considering it was a long diversion on their way to see friends in Penzance. I knew the tide was high, but still hoped I was somehow wrong. No such luck – the tide was in and it was clear that the easy beach walk all the way to Porthleven wouldn’t be possible. We wanted some beach walking and it looked like there might be a path back up to the cliff further along or the chance to make it to Looe Bar on the sand, so we set off. Walkers coming towards us confirmed the path and we glanced up smugly at the tiny figures of walkers on the cliff. Our smugness was soon wiped away when we could find no trace of a path and could clearly see the end of the sand and the beginning of the rocks (still serpentine rock?)

It seemed a long way back so we/ I thought it a good idea to take off our boots and trousers and to paddle/ clamber/ climb across the rocks. This proved a little hairy at times, especially if we mistimed a jump across from one set of rocks to the next as they were very slippery and sharp. 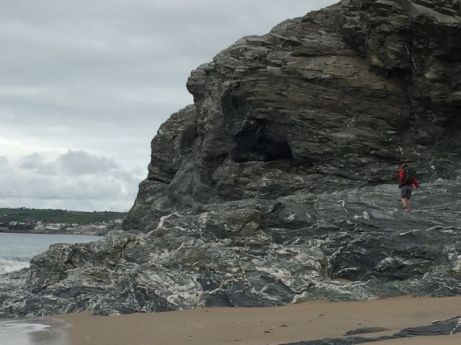 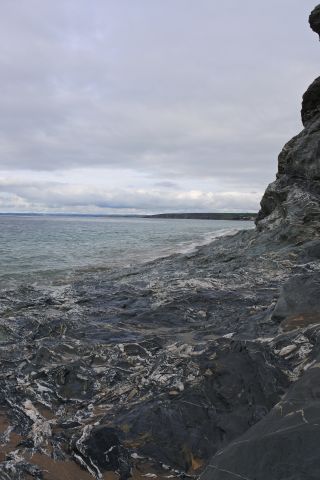 Babs was not impressed at the time 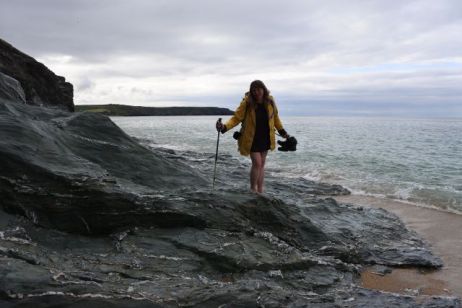 whereas I paradoxically found it comical and tranquil in equal measure.

Once we’d made it to the other side, the sand walking on Looe Bar seemed quite hard work. I thought that due to our low route on the sand, we may not even see the inland pool, but when we climbed up the beach to rejoin the path, there it was. 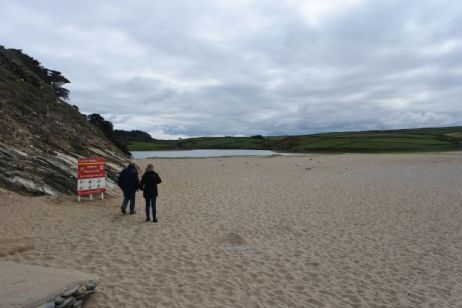 I couldn’t be bothered going closer as I was more concerned with spending time cleaning and drying my feet thoroughly.

Into Porthleven and we were transfixed by the driftwood, funky waste garden. 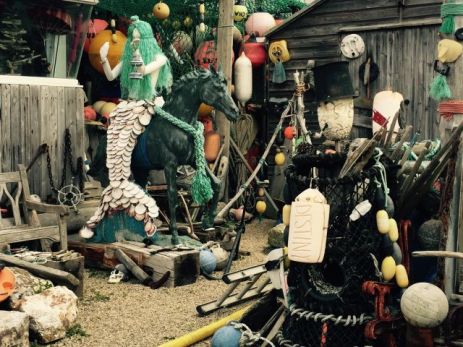 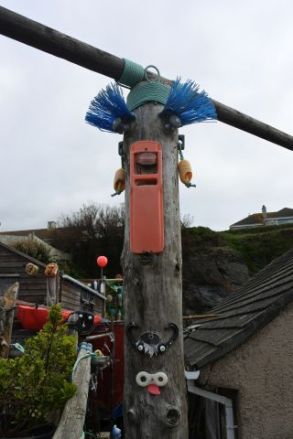 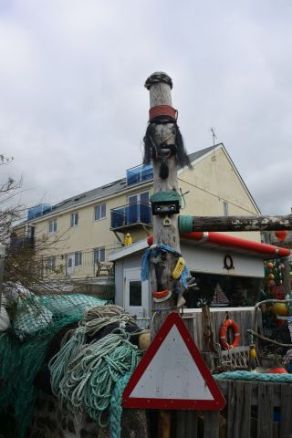 Babs had been here before with Elizabeth and really liked it. I can see why. 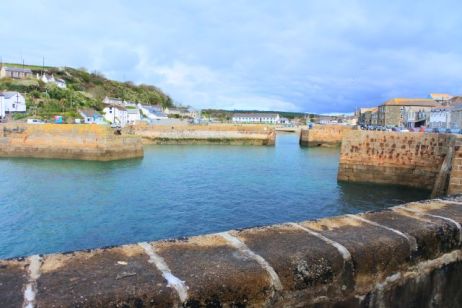 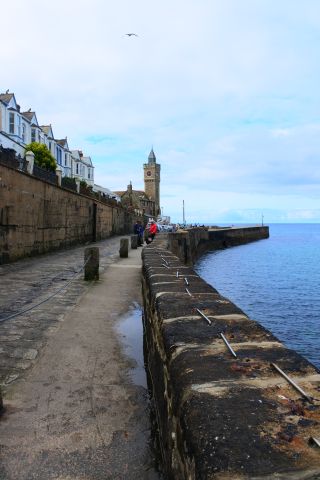 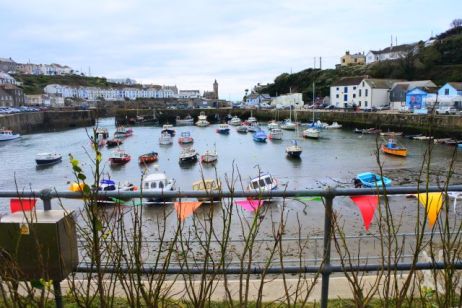 A bit of a climb out of the harbour onto Bullion Cliff with a lovely view down into Parc Trammel Cove. 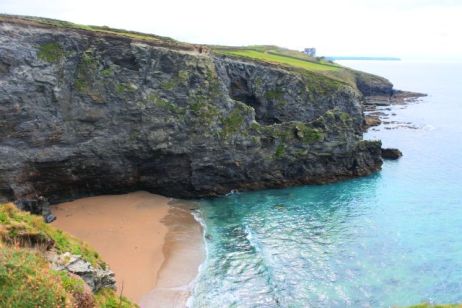 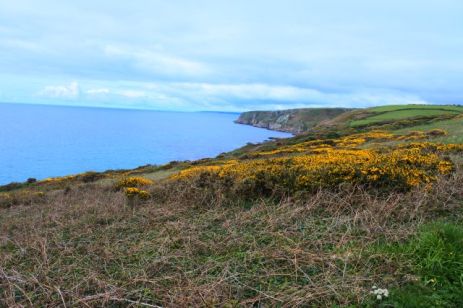 and then came upon what we assumed were tin mines, but from reading Ruth’s blog post I discovered they were copper mines. I also felt thankful the weather we experienced was much more clement than for Ruth. 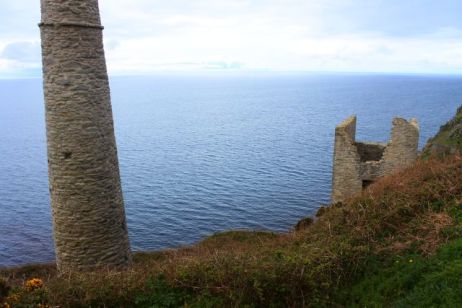 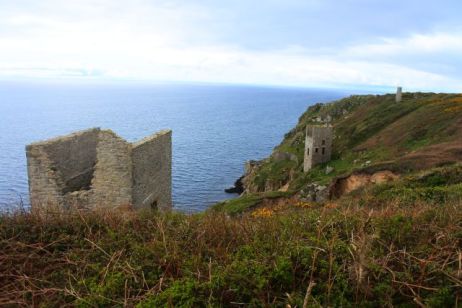 Around Rinsey Head there are some steep sections (the steepest on this whole trip of five day’s walking). We had an hour or so when we kept overtaking a family who were going to Praa Sands and then if we stopped they would overtake us (none of them looked prepared and at one point the mum told us emphatically that she hadn’t signed up for this!)

We both had a sinking feeling that the path would take us down an incredibly steep path to Portcew beach but it didn’t, which was a pleasant surprise, so to celebrate we had our lunch using this mine as shelter from the wind. 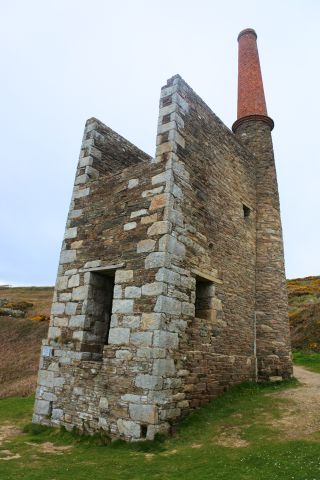 At Praa Sands we took the opportunity for an easy walk along the long beach. 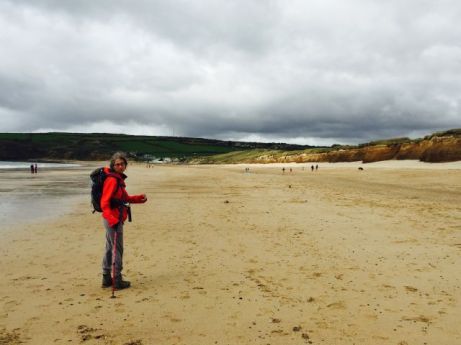 The next stretch around Hoe Point has some interesting rock formations down below and we could see Kenneggy Sand and The Enys poking out at the far end. 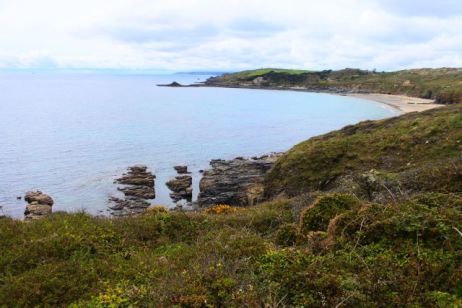 The path eases it’s way above Kenneggy Sands and it was clear that this beach is just as impressive as Praa just much quieter (only the occasional stick figure down below us). 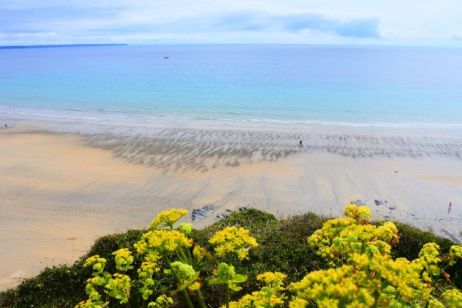 Noticed a serious sign that needs heeding, but I couldn’t help chuckling at the images of the people. 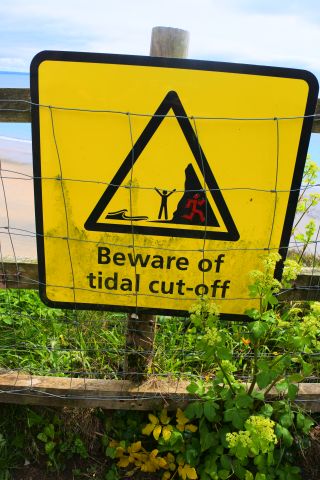 And then fell in love with the house at the end on the The Enys/ Kings Cove. I decided it was my Manderley (although I know the real location is elsewhere near Fowey and the descriptions in the book locate the house slightly further back from the sea). Somehow the wild remoteness and grandeur made it perfectly romantic. 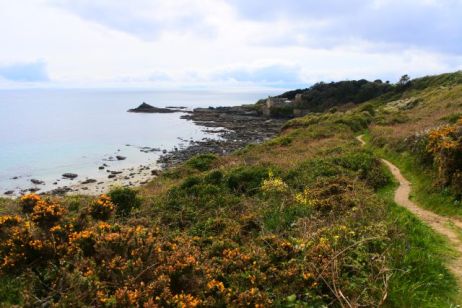 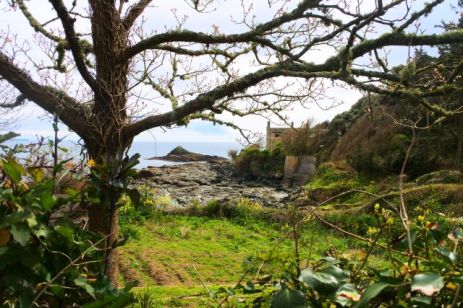 As we came to the end of the beach and took the path up towards the house, a trio of young people approached. I couldn’t help but hear a snippet of their conversation which was: “I really must do some more Bach”. Me and Barbara glanced at each other in amazement as it is not the kind of comment I associate with teenagers. However, when the path took us between the main house and a cottage, we could see and hear a grand piano and our curiosity heightened. 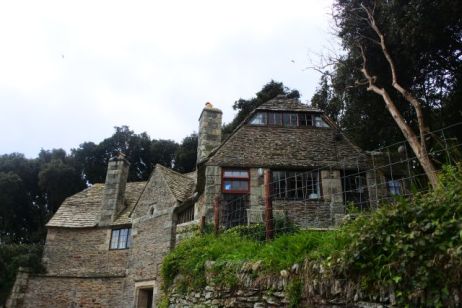 Round the corner and overlooking Bessie’s Cove we met some walkers who told us that it is a music school. What a magical Harry Potteresque education establishment and to add to the eccentricity of the area we looked down to the sea and saw a bevy of mature buxom bathers stepping off the rocks with their bathing hats on and into the sea for their daily constitutional. If you look closely you can just about spot them – I really must sort out my camera situation! 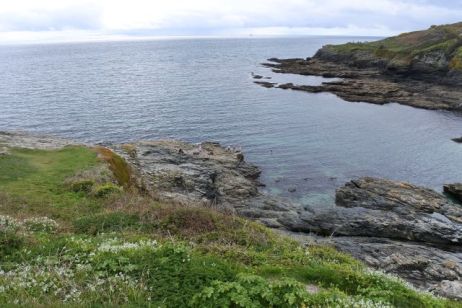 From the trig at the high point above Zawn Susan 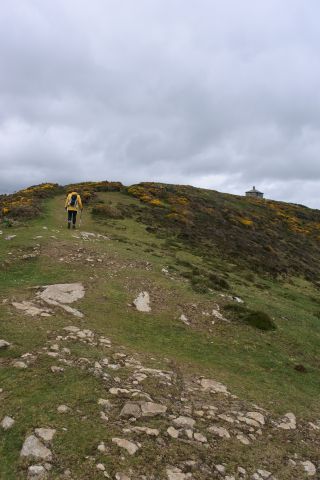 we had our first sightings of St Michael’s Mount and as we walked closer along Stackhouse Cliff it started looking more and more ominous and foreboding, hung as it was with black clouds. 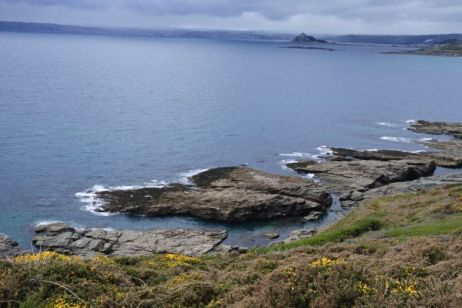 Perran Sands came into view, with the sprawl of Penzance in the background, 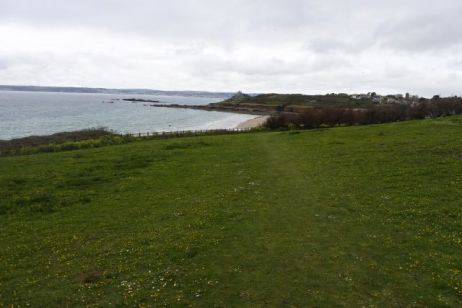 and before we knew it we were through a field of healthy looking cauliflowers, 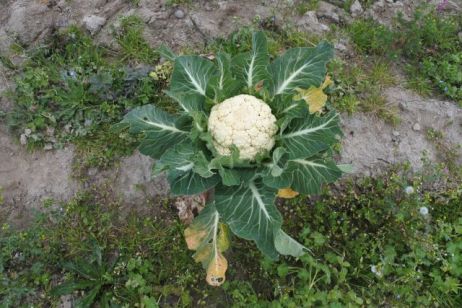 down next to the sands and then up into Perranuthoe for a welcome pint at The Victoria. Ben and a band of kids were there to greet us and wind us up with stories of a trip to Gnome World (which was in reality a very exciting go-karting experience).

Five days of loveliness – bring on the next trip.

This entry was posted in 2017, Cornwall. Bookmark the permalink.